I was going to make my own birthday cupcakes, but my mom ended up making me some funfetti cupcakes! yumm…. But since I was having a BBQ a couple days later to actually celebrate my birthday, I still decided to make some cupcakes myself.

This post was my inspiration. I went with yellow cake instead of white… It ended up making my colors not as bright and perfect as I wanted. My blue was a little greenish and my purple just looked brown. (They ended up turning out great though once they were baked.) Oh and I used Wilton icing colors – pink, lemon yellow, leaf green, sky blue, and violet. 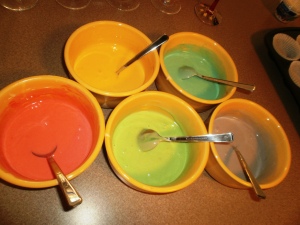 I used my finger to push the batter to the edges like the inspiration post said, but They still didn’t bake perfectly… I’m guessing bubbles or something is what brought the lower colors up.

I was about to run out of pink so I did the last few with pink on bottom and purple on top. A few ended up without pink, and the last one actually only had green blue and a tad of purple. My husband got that one, he always eats the ugly stuff so no one has to see it!

I did a simple white vanilla buttercream, and piped it on so that it looked fancier. Topped with rainbow sprinkles of course! My brother asked me how I got them to look so perfect. 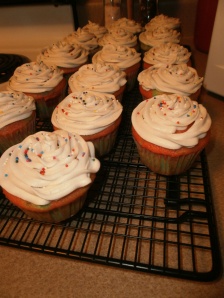 It looked so much better than I was thinking it was going to! One of my friends said she didn’t know it was rainbow until she bit into it, and it made her so happy she had 3 more!

Next time I may try different colors instead of rainbow..