These high school graduation cookies were made for Jayla. School colors were purple, black, and white. I tried to do less black and more of the other two colors because sometimes too much black icing scares people. 🙂

I have been practicing using different fonts lately. This is one of my favorites. 🙂

Since I do everything freehand, this post by Lizy B helped me a lot! 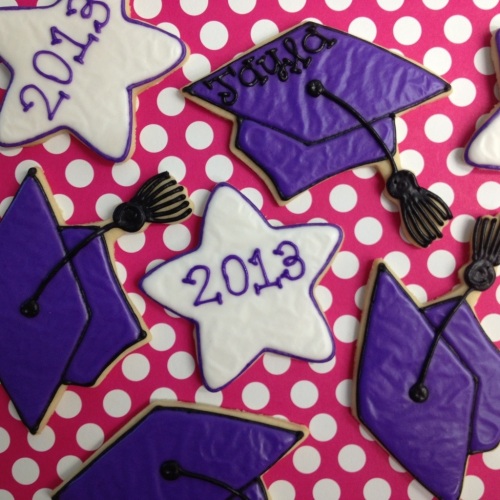 For anyone who has missed it on Instagram, here is a little pregnancy update. 🙂 The pup likes to be in all my photos!

The turquoise wall behind me is the baby’s room. We’re not finding out the sex, so we wanted a bright neutral color that we can add to later. All of the furniture will be white.

A young lad in a family that we are very close to graduated high school (from my high school!) last week. He is the youngest son of my old swim coach. I offered to make cookies for his graduation party, and his mom gladly accepted.

I was discussing designs with my mom, and I knew I wanted to do something swimming related because the entire family was very immersed in the swimming world. My mom told me that he was “not that into swimming” and that it was mostly the older brother who had been interested in it. She said the younger only did it because his dad was the coach. I thought she was crazy, but I had kind of put off the idea anyway…

Then came the high school swim team’s awards night. My swim coach was retiring after 18 years of coaching high school, so a sort-of surprise party was arranged to bring in as many old swimmers as possible and flood the audience at the awards night. (I made and brought 6 batches of kettle corn for the event!) It was there that his youngest son, who’s “not that into swimming” won award after award, and it was obvious that he was one of (if not the) fastest/best guy on the team. I concluded that my mom was undoubtably wrong and that I was doing some sort of swimming cookies after all.

(When I told the graduate this story, he laughed and said he was more into swimming than his older brother!)

I ended up just doing one swimming themed cookie, because too many designs would have made me crazy. These are my high school colors, with a “splash” of “pool” blue. 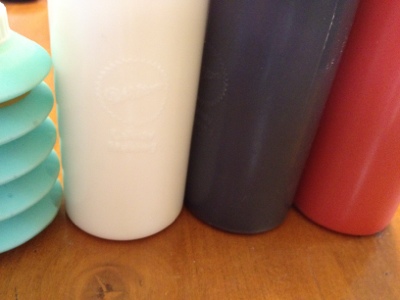 I made graduation caps, stars, circles with our high school initials on them, and fancy plaques with the graduate’s name.

At my high school, the girls wear red robes and the boys wear black. 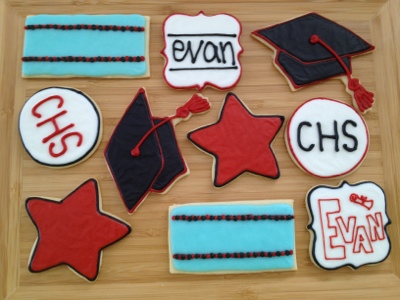 Here are the swimming cookies. For those not immersed in the swimming world, the red and black dots are lane lines that are strung the length of the pool to separate the lanes. At my high school, our swim team had a tight budget, so our school colors lane lines only came out for special occasions like a swim meet. 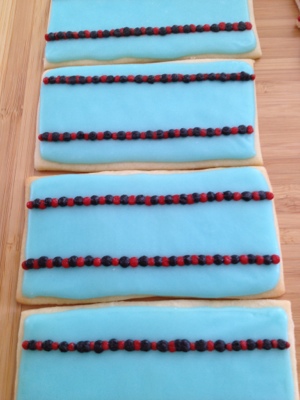 Here are all the cookies on the platter. I love how the blue gives it a pop!

Oh yeah and I did one 2012 cookie. I wanted to do more but I thought it would be too fragile. 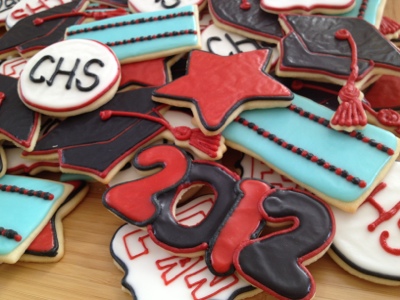 These cookies were my second official order! My coworker’s husband was stuck in an unemployment rut and decided to go back to school. He just graduated from a technical school with a degree in drafting. He was top of his class, and became part of the Alpha Beta Kappa honor society. Best part? His professors helped him get some awesome interviews, and he landed an awesome job right off the bat!

As a surprise, she asked me to make him some graduation cookies for the party she was throwing him this weekend. His robe was navy blue, and one of his many tassels was red, so those are the colors I went with. (The others weren’t as exciting – white, silver, something like that…) At that time I didn’t realize the party was 4th of July weekend, but it turned out perfectly!

I also incorporated the ABK, because that was something he was very proud of. 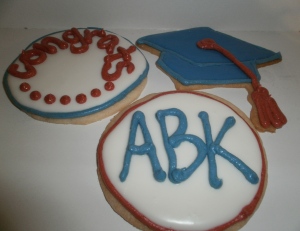 Can’t wait to do more orders!!

My little brother graduated from college and I made him cookies for his graduation party. He was on the crew team and it has become a big part of his life, so I also wanted to incorporate that into the cookies. Here are the new cutters I bought for his cookies (from cheapcookiecutters.com):

The only boat they had was a canoe and he does NOT row canoes. He gets so offended if you mistakenly call it a canoe or a row boat lol. So I didn’t get a boat.

I was worried about losing the tassel of the cap, but they were easier than I thought they would be.

The oars on the other hand, were a pain in the you -know-what. They are about 4 inches long but only about 1/2 inch wide at the paddle part. the mid section is SO skinny that I had to carefully straighten them all out before I baked them. I broke lots just trying to get them off the pan. Here is what survived: 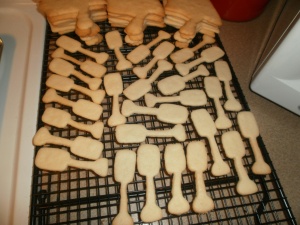 When it came time for decorating, a few more oars got broken. Good thing I made a ton of those little s**ts.

School colors are dark green and yellow/gold. (I had a hard time getting the green to get dark enough.) The oars were so small I decided not to even outline them, and it worked out okay. I just kept the icing a little farther from the edges and didn’t do too much so it wouldn’t run down.

Here are the final products: 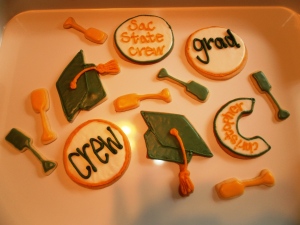 That crew one was my favorite. Too bad it was one of the last ones I did, I would have done more like it!

I did a few funny ones for my brother… he often sat in the seat in the boat called the “stroke seat.” They are kind of like the leaders of pace. I made one that said “Stroke it!” I thought it was hilarious, until I showed my brother the picture and he informed me that I had a misspelling:

The 2- is the symbol for a 2 man race in which each guy has only 1 oar. It’s the boat my brother finished the season racing. (It’s very difficult because if one guy is pulling harder than the other, the boat turns. They have to be precisely together, and the boat is only as fast as the weaker man.) I know my brother was proud of this title, so I did a few cookies with the 2-.

The “row row row your boat” was my husband’s idea. My brother didn’t laugh.

The only platters/trays I had that were big enough for this many cookies were red, and of course not everything goes with red, so I headed to the store to get a new platter or 2 that were more color neutral. I found this serving tray at Target with handles on the sides, and it’s perfect. A couple inches tall so it could actually hold even more cookies if needed!

I officially have a second order placed! A coworker’s husband just graduated so I will be making cookies for their party. Different colors, so it will be fun!

But first, I have a baby shower to make cookies for next week!