These were made for a friend’s friend’s husband’s birthday. The birthday boy loves Sierra Nevada beer, so these were done especially for him. (He also loves Budweiser but I was not brave enough to go there!)

I wanted to stick to the design of the real label as much as possible, so I formed a plan of attack before I did a single thing to the cookies. First I outlined the labels, then dropped some white dots in the center for the “mountain scene.” 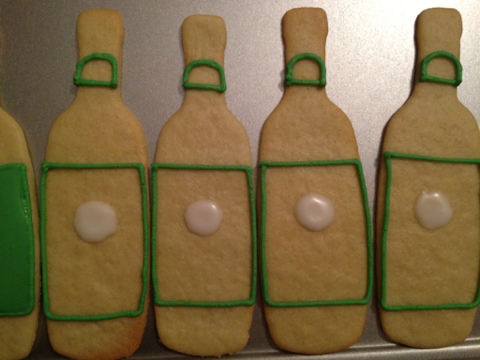 I wanted to wait for the green outline to dry completely before adding the brown bottle outline, because dark colors tend to bleed.

And bleeding cookies are just as yucky as real blood. Okay not really, but to a cookie decorator it’s just as tragic.

Anyways, so I went ahead and filled the green in next before adding any brown.

Once the green was set, I outlined the rest of the bottle and carefully filled it in without letting any of the brown icing touch the still-wet green icing. It did touch on a few. I used those for practice when it came to the next steps…

I put these away and waiting until the next day to do the detailing. I didn’t want to mess up the perfect smoothness of the icing! I first drew on the mountains and river, and piped trees and wheat next to it.

Let’s pretend I remembered to take a photo at that stage. It’s the first time I really used my food markers. They’re tricky on my icing because it’s not completely hard like royal icing. More practice is needed!

The text for “Sierra Nevada” was more difficult that I expected… I was nearly crying over these! (Out of frustration, not sadness.) I wanted it curved over the top of the mountain scene, but it didn’t fit. Then I tried curving “Sierra” over the top and “Nevada” under the bottom. Too much curving and I couldn’t get it right… I decided to just bite the bullet and go straight across with both. The harder I tried the sloppier it got. Piping words it hard! You just have to relax and go at it as natural as possible. Once I realized this (and stopped crying) I was more relaxed and they turned out better.

Okay, suspense is killing, here they are!

My favorite part is the bottle caps!